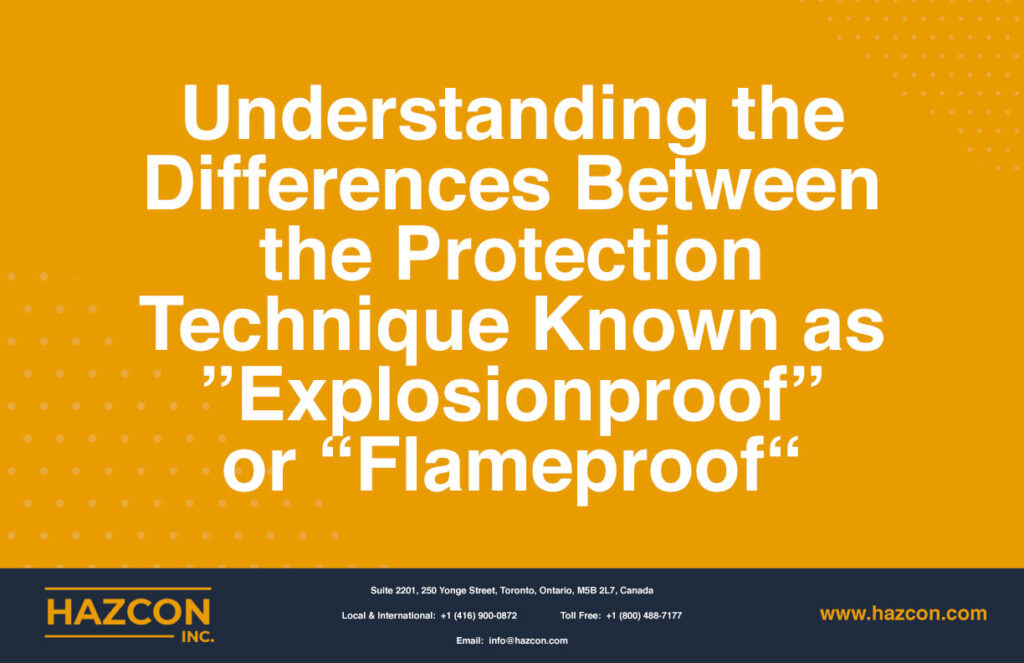 Some electrical devices, even when operating under normal conditions, can produce arcing and/or sparking.  If such a device is installed in a hazardous location (where there are or can be ignitable gases or vapours), an explosion can result.  One of the approaches used to protect electrical devices installed in such locations is based on the principle of containing an explosion, should one take place. There are two names given to this technique:  “explosionproof” and “flameproof”.

This technique involves using an enclosure.  Even if an explosion takes place within it, the enclosure prevents ignition and explosion from being transmitted to the area surrounding the enclosure – the area that contains flammable/ ignitable gases or vapours.

It’s important to understand these differences if:

Following is an explanation of the similarities and differences between explosionproof and flameproof. The differences may seem minor but are critical to manufacturers in the product design stage and when seeking certification.

The term “explosionproof” applies to hazloc products approved by North American certification agencies using the Class/division system, for products to be used in North America.

Historically, the North American certification system is known for its use of a Class/Division classification system. Products to be installed in hazardous locations may be Class I, Division 1, for example. Hazloc products that are Class I Division 1 typically use the explosionproof protection technique.  Products using the intrinsic safety or purging and pressurization Type X protection techniques can also get Class I, Division 1 certification.

A product wanting to get a Class I, Division 1 marking using the explosionproof protection technique must comply with Standard UL 1203 for the US and CSA C22.2 No. 30 for Canada. Keep in mind that all electrical products in North America must also first comply with what are called general safety (also known as ordinary location) Standards. This is the one of the major requirements for obtaining a hazardous location certification for North America.

These two Standards also address the designation of gases into groups. The gas groups for Class I Division 1 are A, B, C, and D. Gas groups indicate how easily ignited the gases within that group are.  Gases in group A (Acetylene) are the most ignitable.

And the North American Standards noted also address the Temperature Class (T-class) of the device:  T6 to T1 with some sub-groups for each.

The term “flameproof” applies to hazloc products certified as follows:

There are additional Standards specifically for electrical devices using the flameproof protection technique. They are as follows:

Differences in the Markings of Explosionproof vs Flameproof

Products that have been certified are given markings that are used on product nameplates, in product literature, and in installation manuals.  Because explosionproof and flameproof are based on differing classification systems and Standards, the markings are naturally different as well.

The Explosionproof markings for products that comply with North American Standards, based on the Class/division system, include their Class and Division.  The marking indicates the ignitability of the gas (the Gas Group), as well as the T-class of the electrical device.

Following is an example of a Class/division marking of a product that has been certified by a North American certification agency for use in North America.  The “XP” indicates that the protection method used is explosionproof:

The flameproof markings for products that comply with Zone system certification requirements vary, depending on where the certification was achieved (through IEC or in North America).

2. Can a product with Class I, Division 1 marking be installed in Zone 1 hazardous areas in North America?

Yes, it is allowed as long as the gas groups and temperature class are compatible.  The marking will remain Zone 1, AEx db IIC T4 Gb, for example.

3. What is the best route for an IECEx approved product with a marking such as Ex db IIC T4 Gb (for example) to be approved for the North American market?

First, an IECEx certified product will need to comply with the general safety (also called ordinary location) Standards for North America. These Standards are for consideration of electrical shock and fire hazards.

Major Differences Among the Requirements Noted in the Standards

The protection technique that involves containing an explosion may be called “explosionproof” or “flameproof”, depending on which classification system is involved. Although the international market for hazloc products is strong, based on a Zone system and supported by the Standard IEC 60079-1 for flameproof equipment, the North American market is also significant, supported by Standards in both Canada and the US for explosionproof devices.  North America, which has traditionally used the Class/Division system of classification, has adopted new Standards based on the Zone system, which appear to mirror their international counterparts.  Be aware, however, that there are additional requirements, known as national deviations, between Standards (CSA C22.2 No. 60079-1 versus IEC 60079-1, for example).

Opportunities abound to get new electrical products into the global marketplace.  Be ready to comply with the requirements if you wish to achieve multiple certifications through differing classification systems.  The protection technique you use to contain any explosions may be called either “explosionproof” or “flameproof”, the Standards to which you must comply differ, and the markings on your product will illustrate which classification system you chose. Pursue certifications (of new or existing products) with your eyes open:  be sure to anticipate and comply with the certification requirements and know in advance how your market will perceive the markings your product will achieve, based on your choices.

Complete the form below to get started.

The Use of a Control Drawing for an Intrinsically Safe System

Can the Temperature Code of an Electrical Device exceed the AIT of the representative gas in a hazardous location?

Certifying “Ex” Products for Use in the UK (UKCA mark)