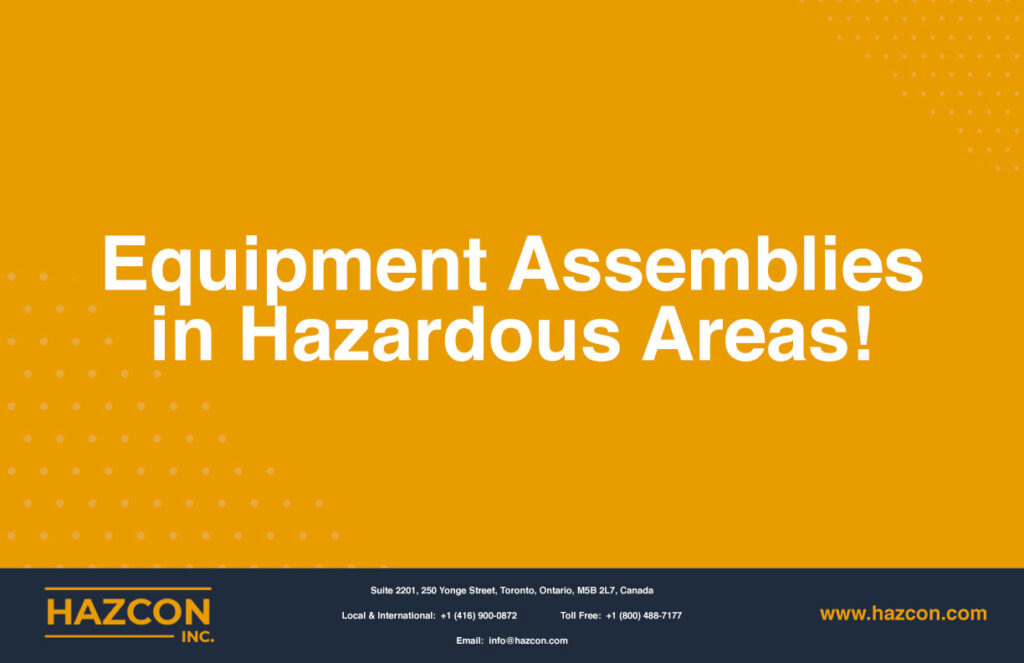 “Equipment assemblies” are defined in Clause 3.1 of IEC 60079-46 as a “pre-manufactured combination of Ex Equipment, together with other parts as necessary, that are electrically or mechanically interconnected that are pre-assembled prior to being placed into service at the end-user site, and that can be disassembled and then re-assembled at the end-user site”. An example might be a skid of individually, already certified Ex-equipment and/or Ex-components connected with each other as a unit to meet the function of this assembly.

The design, construction, and assembly of Ex equipment assemblies for use in explosive atmospheres are the responsibility of the manufacturer of the assembly (not necessarily the manufacturer of each component).  Once items become part of an assembly (even if the items have their own, individual certificates), they are subject to conformity requirements related to the assembly itself. The combination of items in an assembly may cause hazards that don’t exist otherwise.

The Standard that Applies to Equipment Assemblies

Standard IEC 60079-46, published in 2017, applies to an assembly of Ex-equipment that comes together in the form of functioning equipment for use in explosive atmospheres.  The requirements stated in this Standard are the responsibility of the manufacturer of the assembly.  They apply to each individual item within the assembly, even if such components already have their own, individual certificates.

The following are addressed in this Standard:

Design and Construction of Assemblies

The first item to be considered in the design and construction of any assembly of Ex-equipment or Ex components is to perform an Ignition Hazard Assessment to identify all ignition hazards related to both non-electrical and electrical risks that might be caused by the makeup of the assembly.

Cables that connect individual pieces of equipment within the assembly must meet the IEC 60079-14 Standard, or conditions from the relevant Code of Practice depending on where the assembly is to be installed (in what country/ies).

Any conditions related to safe use, including any Schedules of Limitations of Certificates must be addressed and satisfied.

Because the requirements related to individual components of an assembly are replaced by the requirements for the entire assembly, manufacturers of an assembly must prepare a list of all the components (Ex equipment/components and others), along with  the details of each certified device such as Certificate number, Ex marking, ambient temperature range, model number, and any specific conditions that are applied to that part. Such an inventory defines the assembly, its Ex components, and forms the basis of the assembly certificate or declaration of conformity.

As identified in Note 1 of clause 3.2 in Standard IEC 60079-46, the certificate is either the manufacturer’s declaration of conformity or a result of action by a certifying agency.

Markings of an Equipment Assembly

Following are some examples.

As per the IEC 60079 series, the Ex marking for each individual type of protection technique that would have been used, (e.g., Ex d)  is replaced by “60079-46” and the strictest equipment protection level (Ga, Gb or Gc) is applied. For example, the assembly equipment might include an “explosion proof enclosure” with Ex d marking, and an “increased safety” product with Ex e marking, and an “intrinsically safe” device with Ex ib marking. Instead of listing all these different markings (“Ex d e ib IIC T4 Gb”), the marking of the Ex equipment assembly in this example would be:  Ex 60079-46 IIC T4 Gb.

If an assembly consists of two products with the following individual markings:

The final assembly will need to be marked as follows – acknowledging the most stringent of the above requirements and markings:

As per clause 4.3 of Standard IEC 60079-0:2017, equipment marked IIB is suitable for applications for gas Group IIA. Similarly, equipment marked IIC is suitable for applications for Group IIA or Group IIB. Therefore, since one of the products is a IIB gas group, the overall gas group for the entire assembly will be IIB. Products rated and marked IIB are safe for both IIB and IIA.

Given advances in technology, electrical equipment is often combined into more complicated and complex assemblies of already certified items. Standards that apply to these assemblies for use in explosive atmospheres are strict, because of the associated risk of explosion should those products fail. Resulting catastrophic events can mean loss of life and the destruction of property. It is wise to be well prepared for success. Know in advance what your plans are for your assembly, the combination of each individual devices, the strictest.

Complete the form below to get started.

The Use of a Control Drawing for an Intrinsically Safe System

Can the Temperature Code of an Electrical Device exceed the AIT of the representative gas in a hazardous location?

Certifying “Ex” Products for Use in the UK (UKCA mark)